In April I attended the Danny O’Brien photowalk which was arranged by the photowalk.ie site in remembrance of this popular chap. Danny sadly passed away in 2010, a week after the Trim Balloon Fiesta, which he enjoyed photographing and taking part in.  The walk was therefore arranged for the weekend of the festival this year.   I never had the pleasure of meeting Danny, but everyone I spoke to over the weekend had plenty of fond memories and great stories to reminisce over.

Once everyone had met up, we walked to the cemetery where Danny was buried. At first I felt a little uncomfortable being there, mainly because I didn’t know Danny or his family and I felt like I was intruding. However his family were very welcoming and seemed very appreciative of the large turnout of friends and enthusiastic photographers.

After we had all paid our respects we were taken on a guided walk of Trim by local historian Noel French. He had some fascinating facts about the town, but sadly I didn’t hear some of the stories he had to tell as my ears are not the greatest; but I did manage to take a few photo’s along the way.

Our first stop was the Wellington Column.  This was erected in commemoration of The Duke of Wellington, Sir Arthur Wellesley who was educated in Trim.

We then made our way to Saint Patricks Roman Catholic Church.   I’ve often admired this church from a distance, but never taken the time to explore.  We didn’t go inside as it seemed preparations were being made for a wedding, but we got a brief chance to photograph the outside.

St Patrick watching over the flock

As you can see by the date, the building is relatively new which surprised me greatly, therefore there is no great historical stories to tell about this gorgeous building. 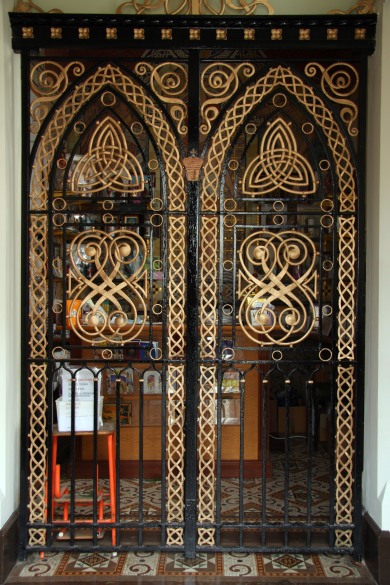 The church is built on a hill that overlooks Trim Castle.  As we descended I noticed that the fiesta had already started and we could see the various shaped kites being flown over the castle walls.  The day was off to a good start.